Des Planes, IL – The world’s largest purveyor of fine processed foods has recently patented a new technique that may turn the fast food industry in its head. The patent solidifies McDonald’s commitment to cater to the lowest common denominator of clientele by removing the necessity of forming any recognizable syllable. Craig McCraigerson of McDonald’s technical response department admitted, “Many of our most loyal customers find proper pronunciation in any language a severe determent from visiting our locations a least 6 times a week. Often times our hard pressed staff is left grasping at straws trying to comprehend the constant raping of proper language. So we have patented a new ordering system that only requires a series of guttural grunts in order to communicate delicious menu choices to our well trained employees.” 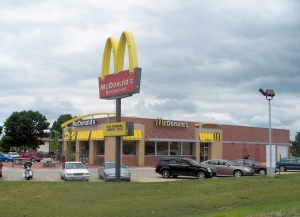 McDonald’s changed the industry in the past by offering a number selection menu where customers could order well over 3200 calories of processed farm remnants with just a single number or phrase in almost any common language. As the clientele of McDonald’s evolved it has become increasing difficult to force customers into uttering complete syllables like ‘one’ or ‘two’. The new system proposes a series of grunts and heavy breathing to communicate an order to the low paid customer service representative.

McCraigerson also stated, “While we understand our customers burn tremendous calories transporting their rotund physique to our stores, we do not wish any unnecessary waste of life giving caloric energy. We no longer force our patrons to expend effort with an abstract and archaic language when a series of grunts and wheezes could just as easily suit the job.”

In the newly proposed system a Number 1 Super Value Meal is now “ungh” or a grunt. A Number 2 Meal is now an “ungh, unugggghuh,” or a ‘grunt wheeze’ according to industry experts.

Cameras will be deployed at drive through locations in order to process the point and grunt technique so that the accuracy of patron’s orders will be properly addressed. The cameras will allow fat sausage finger gestures to accompany vocal cues for inarticulate consumers. “Any technology that allows me to avoid customer contact is fine with me,” stated 3 month retail veteran Miles Davis, “It will make our job much easier and I think the customers will be happier.”

The new procedures of ordering at fast food restaurants are not without critics. Prof. Theodore Uptightly expressed disgust for the new system stating, “The end of true language is at hand. The inability of the vulgar people to express even the most basic of human necessities is further reason to begin serving pure swill to anyone who cannot accurately describe what they want.” Some have called Uptightly’s comments as ‘rude and ignant’ (sic). In either case McDonald’s cannot be criticized for knowing its customer base and catering to the lowest rung of filthy human waste.

McDonalds has rolled out the new point and grunt menu system to select stores in the Mid-West, the Deep South, and San Francisco.

Daytona, FL – Local fat man, Bernard Fowlerington, began his day the same way that he had for the last 2 weeks. After a light breakfast, and a quick weigh in, he began planning his lunch for the day. As he opened his refrigerator door, a great darkness overcame him even as he surveyed his options. “1/2 sandwich and salad or soup and vegetable medley I thought to myself” said Fowlerington, ” when it hit me. This is spotty rabbit food.” He began to remember what had motivated to get out of bed every morning. “McDonalds! I said out loud to myself. Every morning I dreaded getting out of bed and the daily grind. I would just lay there until I would think of those beautiful golden french fries. I would think about what I would get…would it be a McChicken sandwich and 2 large fries or would I go classy and hork down 2 Big Macs.” Fowlerington would plan his day around his regular trip to the nations largest fast food retailer.
Things changed when he visited his doctor for chest pains about 10 weeks ago. “Dr. Pencilpointy gave me a stern lecture about my weight and said my cholesterol was extremely high. He put me on a diet and exercise routine that was hard for me for the first few days but, then it got easier.” Fowlerington was diagnosed with metabolic disorder and his doctor told him that, if he did not change his ways, he would surely die at a young age.
It was 2 weeks in to the diet that he had the revelation that his only true reason for existence was consumption of McDonalds low priced/low quality food. Like a forbidden romance, Fowlerington realized that without the joy of his daily intake of highly processed, high calorie foods, his life had little meaning. It was then that he decided that the diet, the exercise, the pain and suffering was all for nothing if he could not have is Fillet-o-fish, McGrill chicken with extra mayo, or his frosty cold milk shake at least once a day. “I realized that everything I did, getting up, showering, driving to work, working just hard enough to not get fired…all of it, was so I could earn enough money for my one true love…fast food. It was then that I said to my self, ‘you got to get busy living the short life you want, not a long, healthy long life someone else wants for you.'” said Bernard with half a smile “life is all about making the right decisions, not doing what your told.”
Bernard Fowlerington, of course, did not die from his poor diet and lack of exercise. In fact things turned around for him. He suffered a series of mild strokes that left half of his body paralyzed. “It was as if fate stepped in and gave me this gift…” He said struggling to properly form the words “…since the stroke, I was able to go on state disability so now I never have to leave the house except to go to my nearest drive-through and order whatever I want. I truly am living the Dreannnnn…mmmm.”